I got tagged by Charles Yallowitz to take part in a blog hop. I’m supposed to attach a picture of my workplace, talk about it, and then tag a few more authors. Most of you who frequent my blog have more than likely heard me talk about my shed at some point or another. Yes, I work in a shed, and I’ve actually had people suggest I write a post about that, sooooo . . . here we are! You can find a little picture of it on my Facebook cover photo, but I’ll put one here too. 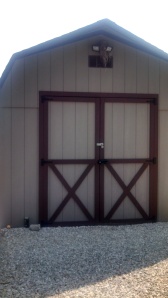 That bird’s nest is now gone from the lights, and my husband’s Monster can (removed when cleaning out the car and put there for some reason?) is no longer on the ground. Now there’s a different one of his energy drink cans on the ground on the other side of the shed. 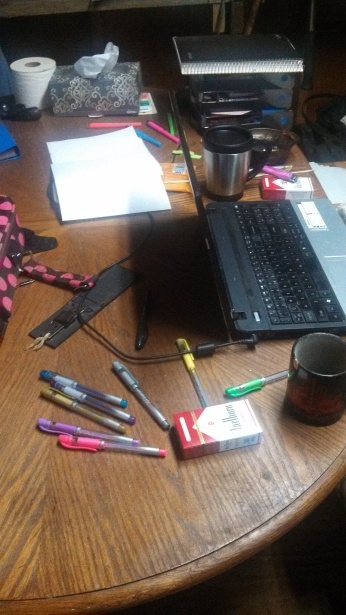 Now, that might look a mess to everyone else, but it’s totally organized. And it might seem a bit weird in general, but it all works for me. From left to right up top, you have: (One of) My gun(s) (Yes, I work in a shed, OBVIOUSLY I want a gun out here), toilet paper that has been sitting right where it’s sitting for . . . an ungodly length of time, which was what I used before I got myyyy . . . box of tissues (needed both for crying while writing/editing (which happens) and during winter when I’m so cold that my nose is falling off), notes hidden under said box of tissues, highlighters and page dividers, notebook. Those three things under the notebook are pen holders for all my editing pens.

Just below all that from left to right is: A blue little paper organizer that you can only see the corner of. The loose papers are the questions for the video Q&A. Yes, they’re still sitting here waiting. A pack of pens that I got for when my neon ones run out (which I’m using in the Positivity Journal for now). Spent pens that I haven’t put up with all the other spent pens yet. My coffee, my bowl where I put out my cigarettes and hold the butts until throwing away (which I do about fifty times every night *exaggeration). There’s also a flyswatter, the pack of cigarettes I’m currently working on, and the one pen that I’m using for editing (until it runs out). (You can’t see a small thing of post-its for place-keeping (again, for editing) behind my pack of cigarettes.) Down beside the table (to the right of where I sit) is a stack of ‘extra’ paper (on a small table), for when I’m editing and have to add long bits. I use that when I run out of space on the printed pages. (I write sort of big . . .)

Then there’s my laptop case, which is a little bit broken. My knife. Don’t ask me why it’s here. Just makes me feel better to have it where it is. What I call an ‘inky pen’ that is used for addressing envelopes (and doing a few other things), then there’s Herald (my laptop).

That mess of pens near the bottom won’t be there for too much longer (depending on editing). I got a different brand a while back (because I want ALL THE COLORS) and they don’t fit in my holders. So there are those, waiting to be used first for editing (after the current editing pen is finished, obviously). Also a few neons for the PJ (and for writing notes on my hand). (I have a lot of neons because I don’t use them for editing anymore. Hurts my eyes.) An extra pack of cigarettes. Then you have my ‘ash cup’. Yes, I ash in and put cigarettes out in different places when I’m in here.

The only thing that’s not where it’s supposed to be is my phone (Penelope), which is always to the left (*left when I’m sitting, below in the photo) of where that extra pack of cigarettes currently is (at the edge of the table). It’s not there because I used it to take the picture . . .

So yes, all that might look like a mess, and it might be a bit weird. But it works for me. As long as everything is where I need it to be, it prevents me from having little mental fits about how things AREN’T WHERE THEY’RE SUPPOSED TO BE. (I’m weird.) This space is seriously, SERIOUSLY where I am most relaxed in the world. It’s my own little place to (hopefully) not be interrupted, and just get sh- . . . er . . . get stuff done.

(You also can’t see the lengths that were gone to to make the weather tolerable out here. Had to hang up copious amounts of blankets to block off my part of the shed from the rest of it. The AC doesn’t have to cool down the whole place, and the heaters don’t have to heat it up in the winter. Also can’t see a welding helmet full of spent pens, which is about half of my spent editing pens. Also can’t see a lot of other things that aren’t writing related.)

(Note: The reason I felt the need to clarify about EVERYTHING was because everything has its purpose. A pen isn’t just a pen. I use different ones for different things. I’m a bit . . . particular. That’s a nice word for it.)

(Another note: If you can’t tell by the handles up at the very top of the photo, there are all sorts of things in here. Hammers, etc. It is a shed. If you also can’t tell by all the weapons/potential weapons? Yeah, I’ve got a lot of choices for the zompocalypse.)

But yeah, that’s my space. My favoritest space in the world.

Apologies if anyone has been previously tagged.

Can I just say . . . I was super stoked to be part of this. That might be ridiculous, but it’s the truth.